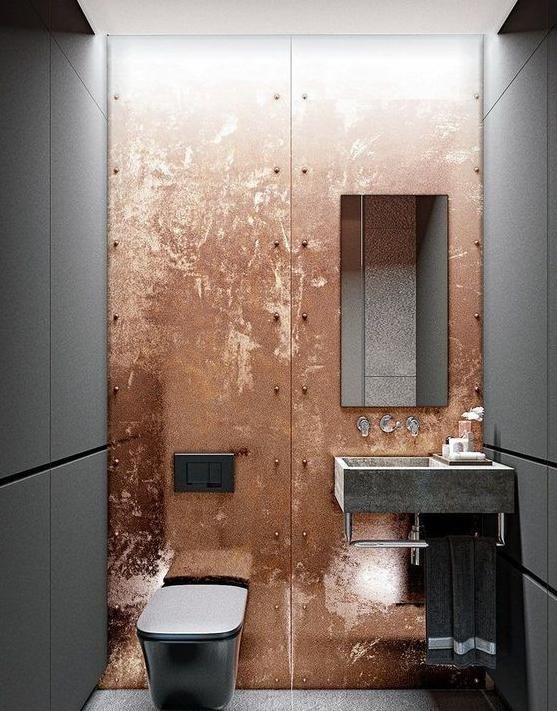 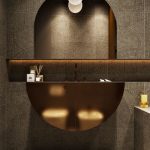 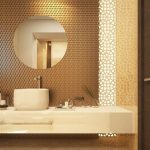 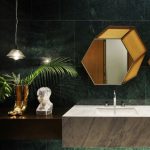 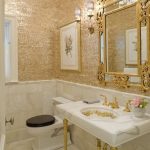 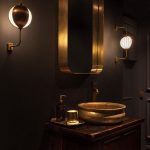 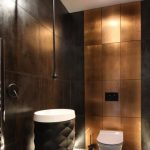 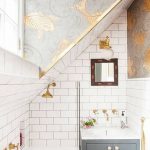 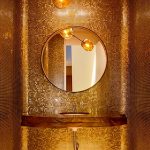 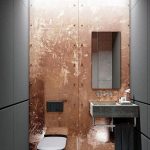 Gold accent surely looks so endearing in making things lit up while also adds some elegance to the room. It is not only incredible with its own color and shine but it also can spread the elegance to the room, even though it is only a small piece of golden accent. In these pictures below, you will see how gorgeous and sophisticated the golden touch is.

Golden Mirror
When you have a dark themed bathroom, adding a golden accent will the room look brighter. IT makes the golden accent look even stronger. 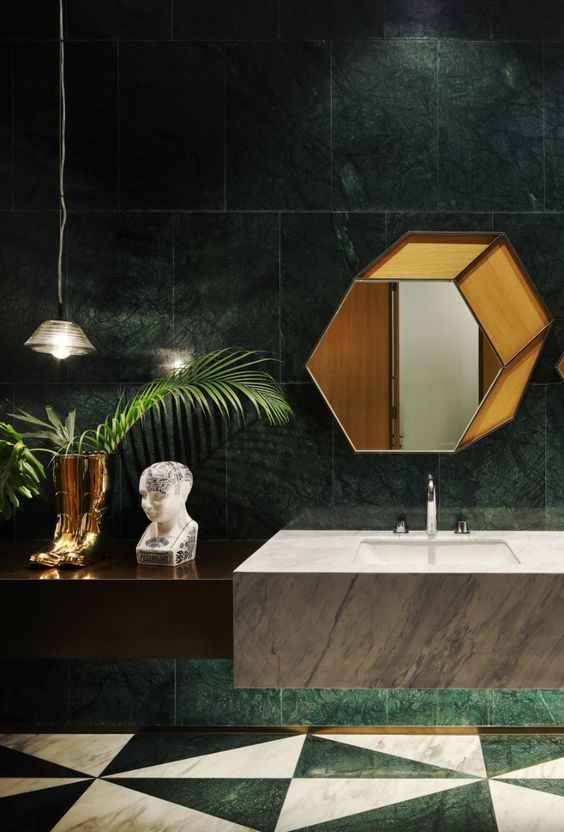 Golden Pieces
This one here presents more golden pieces in the dark bathroom. The golden touches on the round sink, sconces, and curvy mirror obviously look so incredible among this dark brown ambiance. 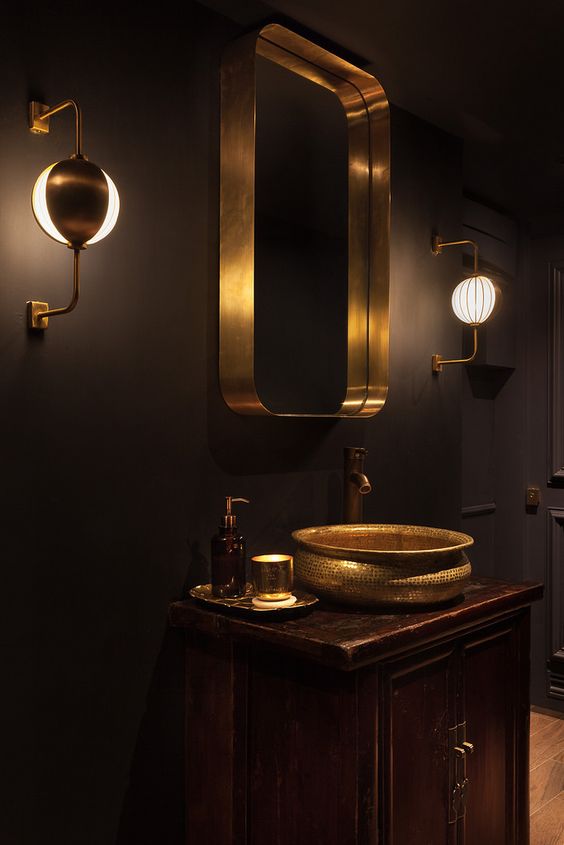 Half-Round Gold
Golden color looks so amazing among dark and neutral background. With them, its light flourish greatly. Seen in this one, the bathroom is touched with golden cabinet in half-circle. LED lights on the dented shelves complete the look really well. 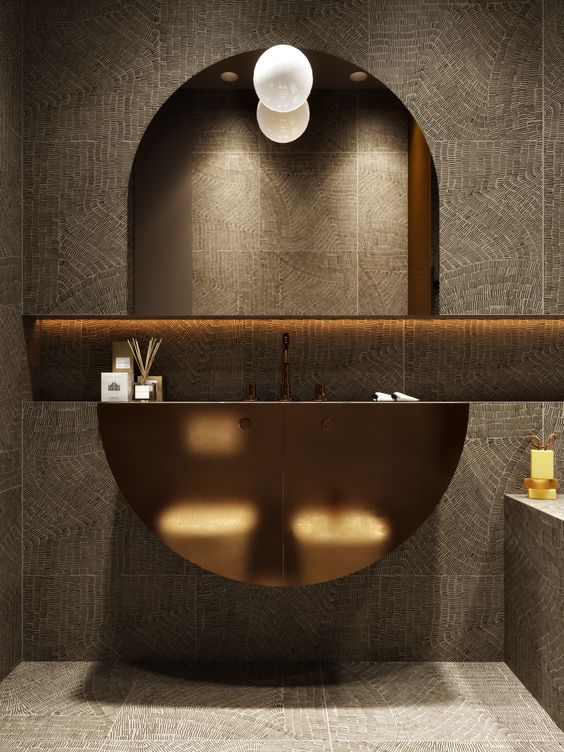 Small yet Significant
This one here implements golden touch on the small things like the faucets, sconces, or rail. And not only that, it puts grey wallpaper with golden fish and lines. Golden Statement
This bathroom also uses golden accent among dark ambiance. The golden layer on the wall glints the lamp’s reflection beautifully. With this golden statement, the bathroom sure leaves strong impression. 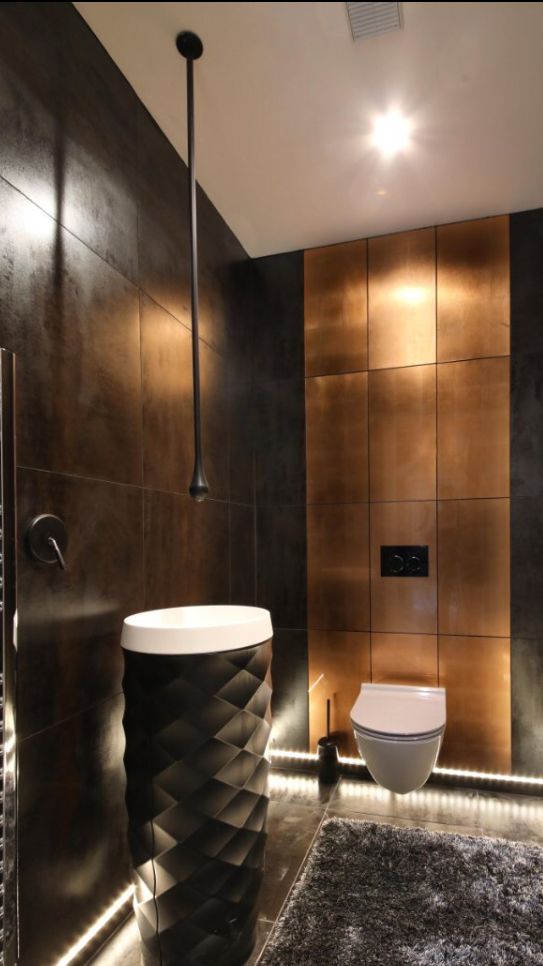 Rosy Gold
If you love to add some gold look in the bathroom but you are also into pink, this rose gold color might suit you the best. Added as statement wall, this one here looks stunningly pretty among the naturally dark grey.

Golden Glitter
As gold has its own shimmer, it is a great idea to put mosaic tiles when you try to show golden look on the wall. Completed with golden framed mirror and white vanity with golden accents, this bathroom looks marvelous. 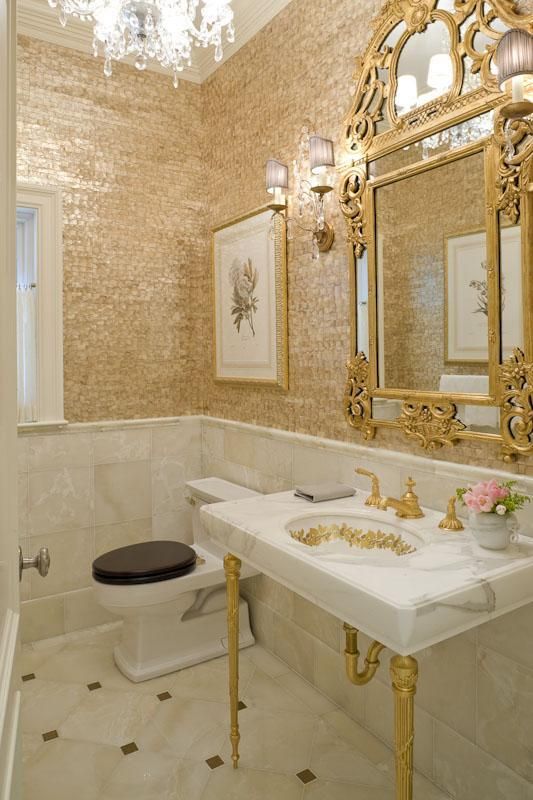 Golden Light
In this one, the golden light is seen from the marble vanity which is illuminated from the LED lights under the vanity. The marble produces golden light that looks so beautiful. Golden Illumination
In this bathroom, everything looks golden. The warm light brown marble tiles on the floor, vanity, and sink radiates golden lights produced by the light fixture. The golden brown and yellow on the wall strengthen the look perfectly. This room shows a soft and subtle golden look. 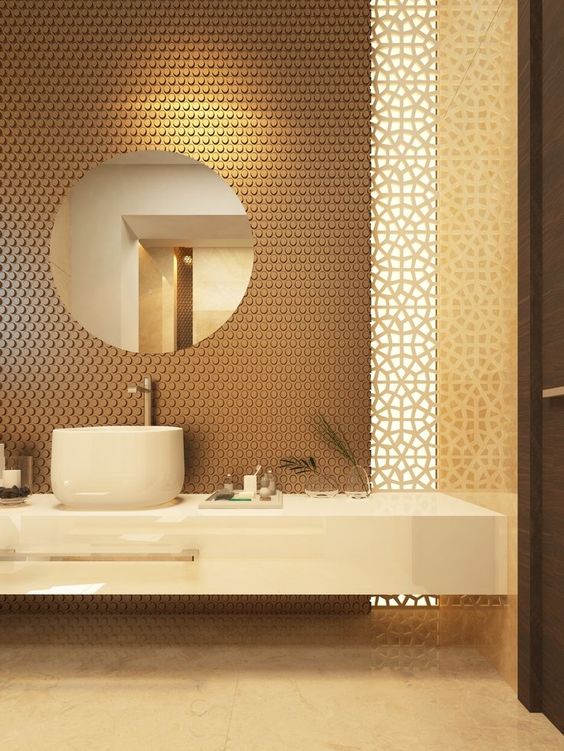 Strong Golden
While the previous one has subtle gold look, this one here radiates a strong look. With the mosaic tiles, the golden light emits from each of tiny tiles. Strengthen with gold molten pendant, this room undeniably shows a great performance in imitating gold look. If you want to go all out, this one can give you a perfect idea on how to do it. However, if you want to go more subtle, you can use this trick on half of the room or to make statement wall. 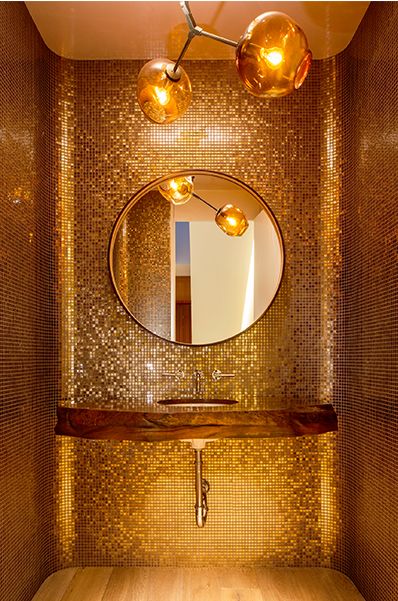