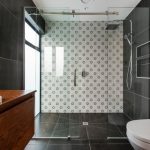 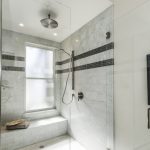 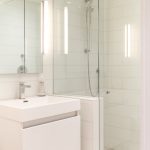 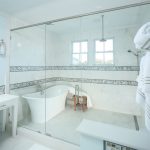 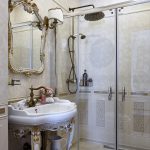 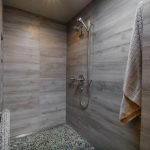 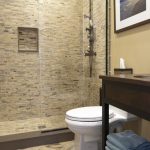 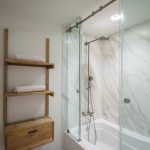 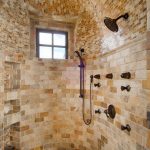 A Minimalist Bathroom with A Sliding Head Shower An Alcove Shower in White

A smart way to fill a small space is using white features and decorations. This small contemporary bathroom has white wall tiles, a small white floating vanity, a hinged shower door, and a sliding shower head. The Calcutta Marble bathes this shower area from head to toe with freshness and a true feeling of luxury. Polished nickel fixtures dress the sliding shower head and the ceiling rainfall showerhead beautifully. An acrylic freestanding tub is put in a large shower space with the glass doors. Besides the freestanding tub, the long rainfall shower and a sliding shower head are also installed on the right side. This fully stone tiled shower with the rustic black shower fixtures will make you feel like you are at a spa. Natural stone is a nice option that can adorn the shower walls. This bathroom has some antique features such as a white sink, sink faucet, a wall mirror, and the wall sconces with the same colors and style. The double glass shower doors can be an easy access to get into the shower space and use the rustic shower fixture. A Stunning Bathroom with The Sliding Shower Head

A bathroom with stunning design can make you proud and special. The wall tiles, floor tiles, the sliding shower head, and wooden cabinet are durable. The neutral blend of mesh-mounted tile from the walls to the floor adds visual and tactual texture in the shower space. The wall-mounted rainfall shower head and recessed lighting add the contemporary style in this bathroom. The sliding shower head is installed on the classic black wall tile. It also has an attached square rainfall showerhead which looks modern and unique.