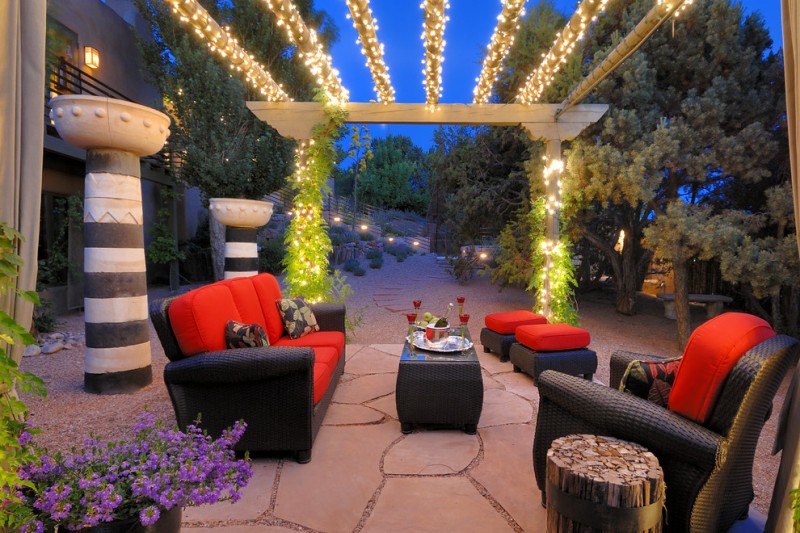 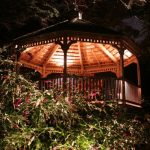 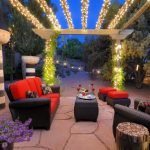 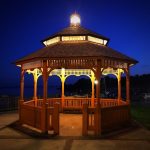 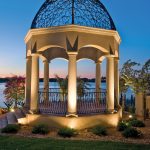 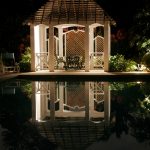 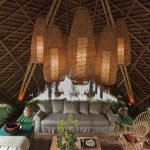 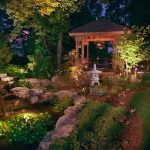 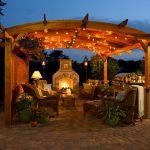 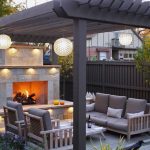 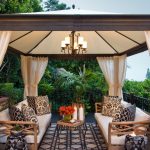 When you have a building and also a yard to decorate, you will want to make sure your house is beautiful inside and outside. And you will of course want to make it beautiful under the sun and under the night sky too. Thus, it is not only how it looks on the daylight but also in the night. If you want your garden looks great in the night, one of the things you will want to make sure is that you have great patio lights. This one is for you who especially have gazebo or pergola in your garden. Here below are some ideas you can copy in your gazebo.

As you can see, this picture below has portrayed a really beautiful set of rattan chairs under a pergola. And on top of the chairs is as beautiful as the chairs, strands of lights on the ceiling that complemented the romantic and warm atmosphere. 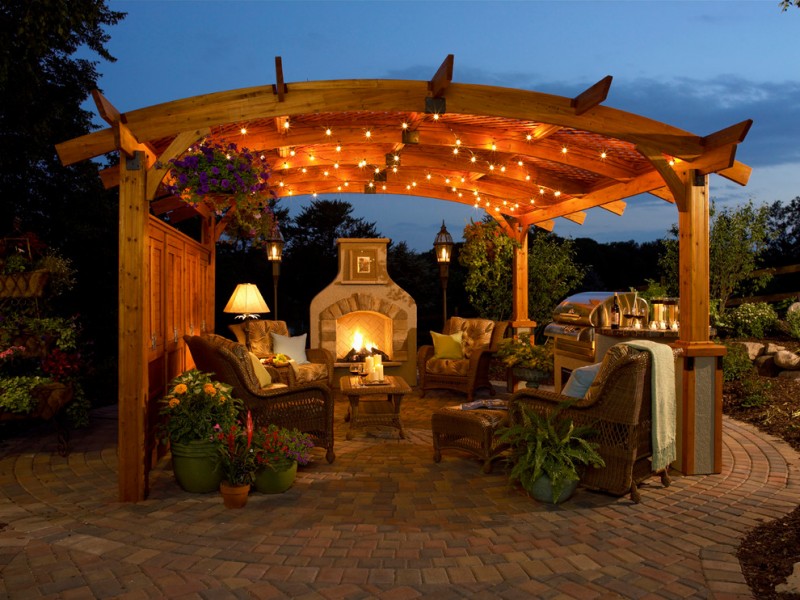 With this beautiful white gazebo, it is so easy to create a romantic look. Like this one here, all you have to do is choosing the right outdoor chandelier. And a romantic floor lights will not hurt either. 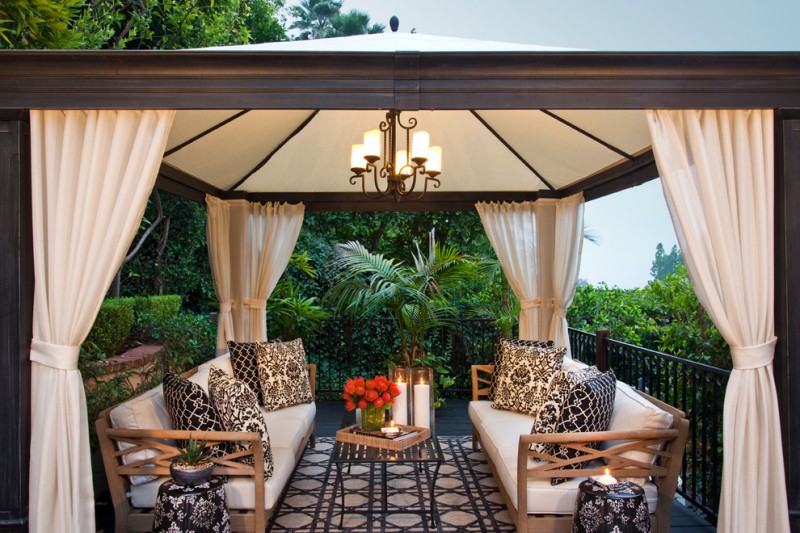 This is a really great look to die for. With the mat roof, you obviously have natural gazebo. You can play with colorful accessories. But, the best thing about this gazebo is probably the bamboo covered hanging lamps. It completes the look spectacularly. 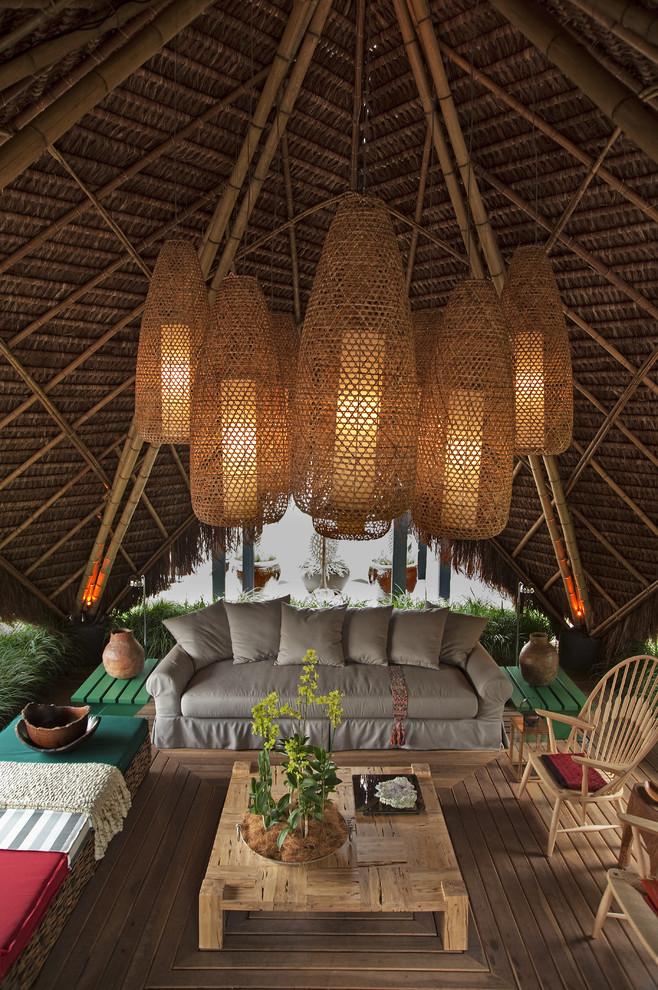 Twisted Lights on the Ceiling

Similar with the previous idea, this one also uses light strands to decorate the pergola. The yellow lights emerge from the ceiling as well as the pole gives merry ambiance to the patio.

This Asian landscape is really beautiful with the chosen plants and the pools. Adding a gazebo is a great touch. The lights are hidden on the trees and pools that create twilight across the landscape. 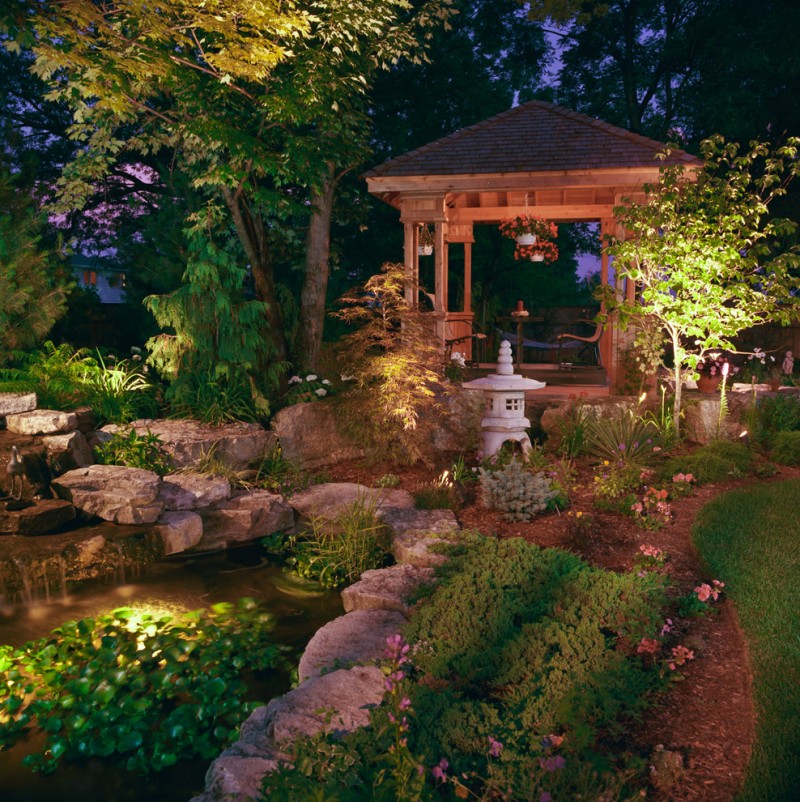 This simple yet beautiful pergola has been brightened by globe pendant lights. It gives a great deal changes to the patio look. 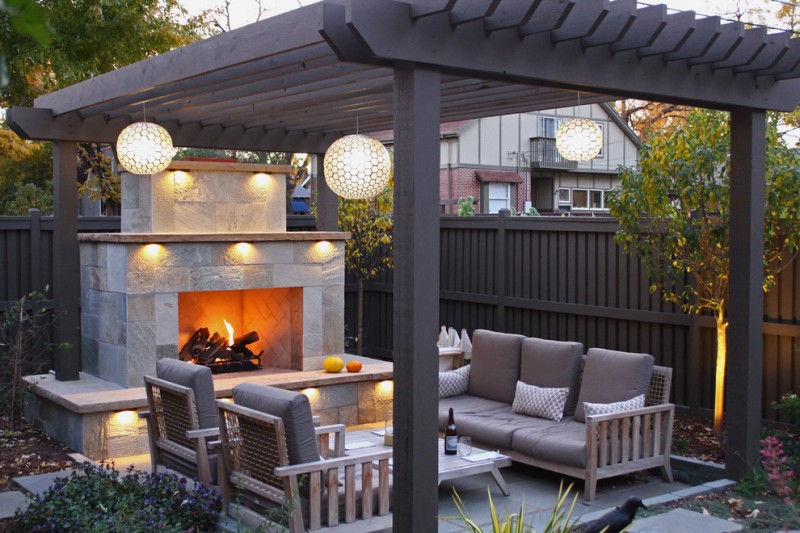 This beautifully design gazebo has spectacular steel ceiling that can take your breath away. And to complete this stunning look, the lights are arranged on the ground that gives the gazebo a grand and mysterious look from the lights illuminated. 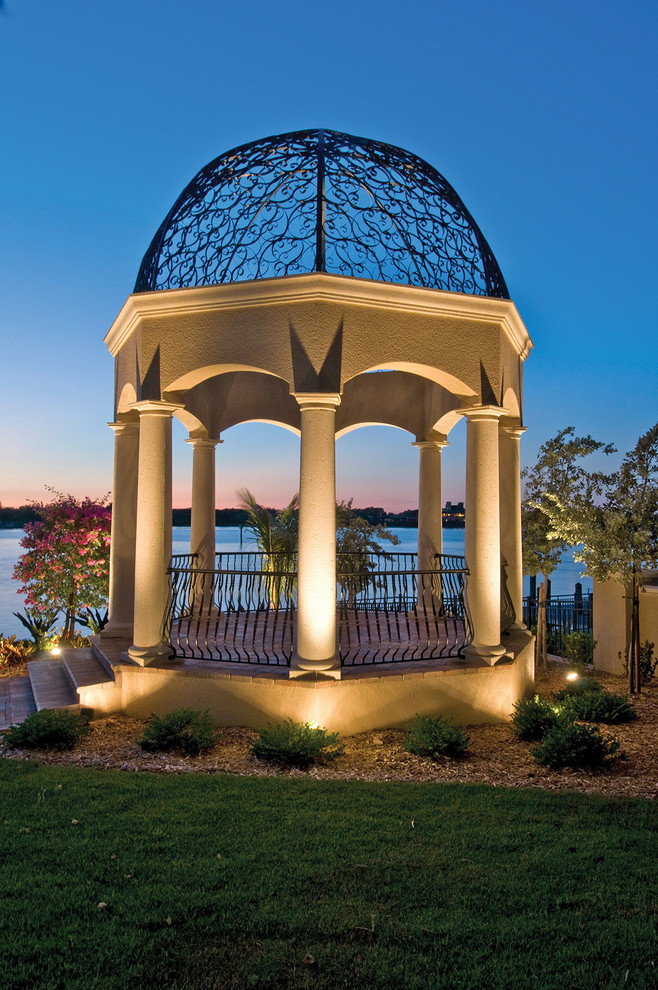 This gazebo brings a reminder of a far far away village in Indonesia where everything is simple and natural. The roof is a typical traditional roof in Indonesia too. With the lights so bright on the top of the ceiling, it looks like a dragonfly has gathered on a side of rice terrace with gazebo. 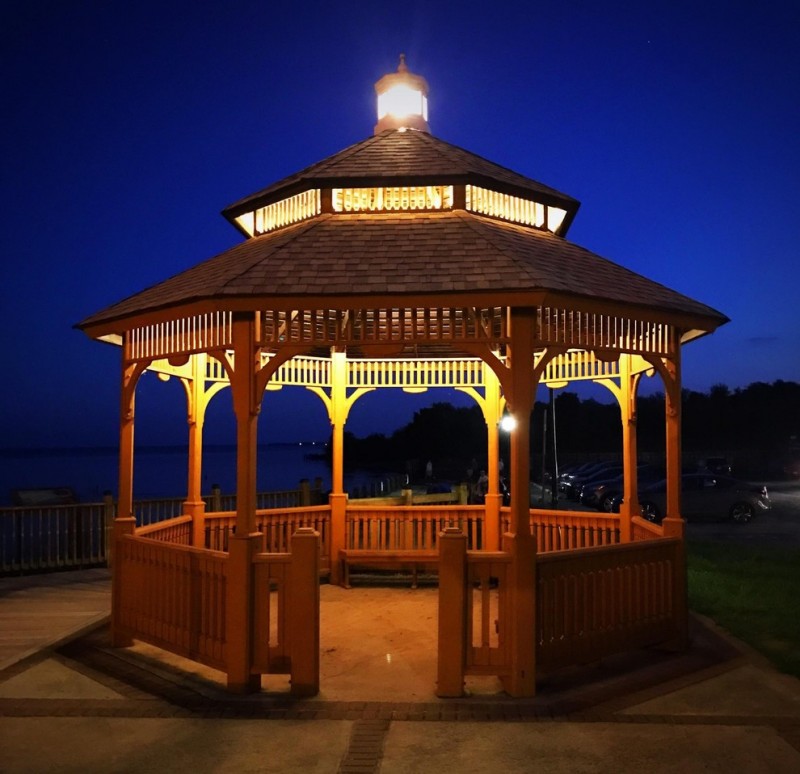 Lights House beside a Pool

This gazebo has a very romantic position. Being near a pool and having all the lights around it, this gazebo looks like the light itself to this pool. 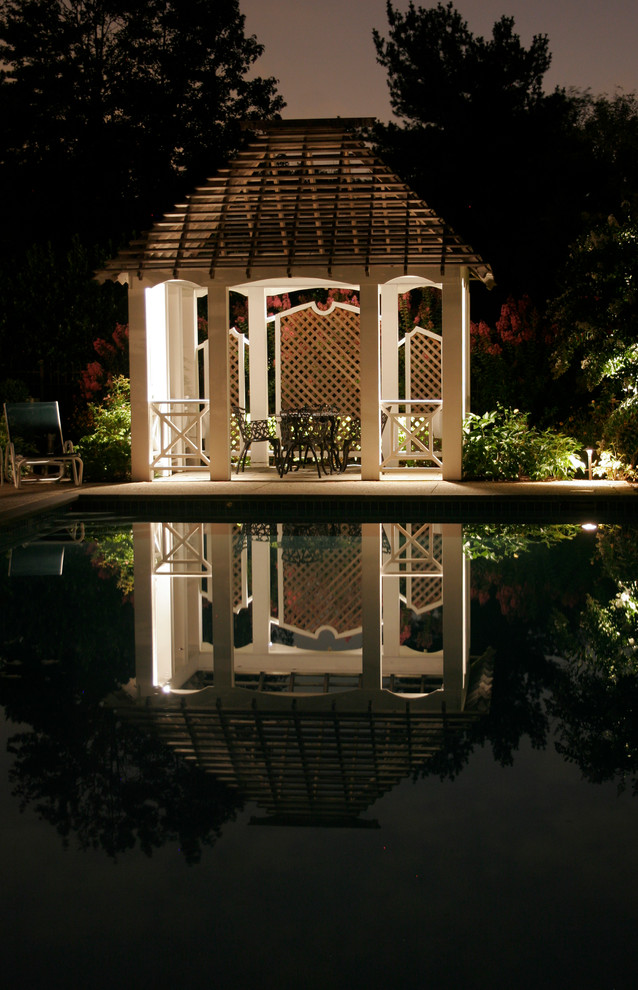 If you place your gazebo in a rather high soiled ground, you will be able to create luminous gazebo that can light up area around it too. 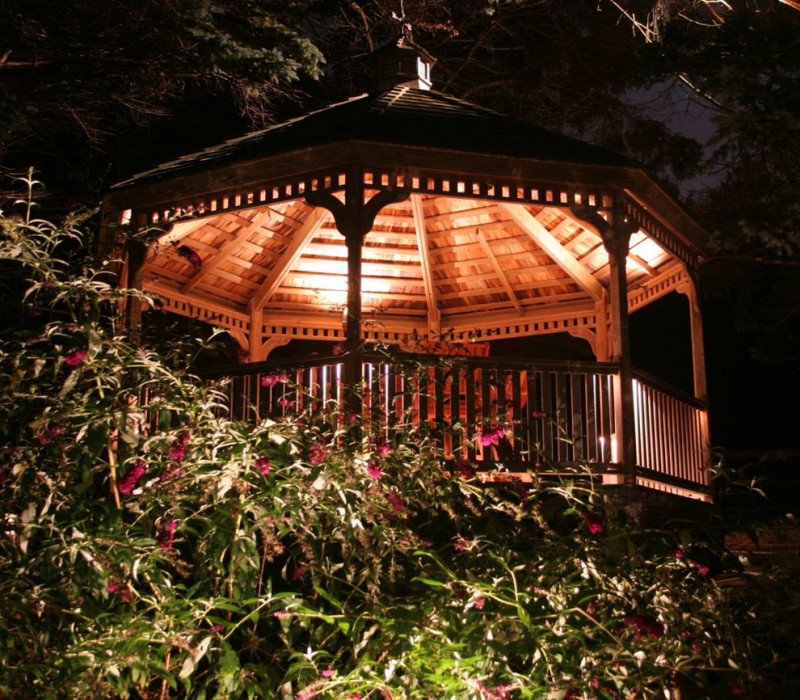